Go back and read the title of this post again but hear it in your mind with a Native American accent. Keep that accent and add a little Canadian to it as I introduce you to Daniel. You got it, eh?

Daniel was the driver for the Sun Tours 8 hour trip I took yesterday around East Glacier National Park in Montana. He is a full member of the Blackfoot tribe to which Glacier Park is a neighbor.

Daniel showed us beautiful mountains and stunning views of many areas of the eastern side of the park. He also shared with us historical information about both Glacier Park and the Blackfoot nation. His humorous approach in telling us stories was a whole lot of fun and I highly recommend him for a tour.

The Niitsitapi, which is the native word for the Blackfoot nation, means ‘The People’. Daniel explained that many of the North American tribes call themselves ‘The People’. I like this. How cool is it that the majority of the members of over 500 different tribes all see themselves as part of one large group of ‘the people’. Unity with variety. We non-native American tribes can learn from this.

He mentioned a few tribes refer to themselves with other names and one of those is the Cheyenne. He said they call themselves not just ‘The People’ but ‘The Beautiful People’. Touch of ego? Probably not as Daniel laughed his almost Santa like ‘Ho, Ho, Ho’ (remember that native American Canadian accent) and told us that most other tribes agreed. The Cheyenne are beautiful people. Which made me think, aren’t we all both inside and out?

I asked him what his traditional name was as many Native American families have an ‘English’ name as well as a tribal name. He replied, ‘I’m just Daniel’. But then he added, his mother’s family has the tribal name ‘Shoots many guns’. Ho,Ho,Ho he laughed again.

He told us stories of other Blackfeet members and their names. He mentioned the elected mayor of their town, Jack ‘Makes Cold Weather’. Sounds more like the name of a meteorologist to me.

It was wonderful hearing Daniel’s stories and learning about him and his people. But the thought came to me that he and his people are really no different than you or I. All of us know folks with funny sounding names right? Be kind now. 😀

We may live in different places, live different lives, and speak a little differently but are we really that different? I think we humans have much more in common than not. We should do better at living in that unity with our variety.

Today is my last day at Glacier Park. I board the Amtrak westbound train again tonight to go to the Portland, Oregon, area. The beauty of this place is breathtaking. The creation around us, both down the street and across the world, is something we all should try to see and experience more of. 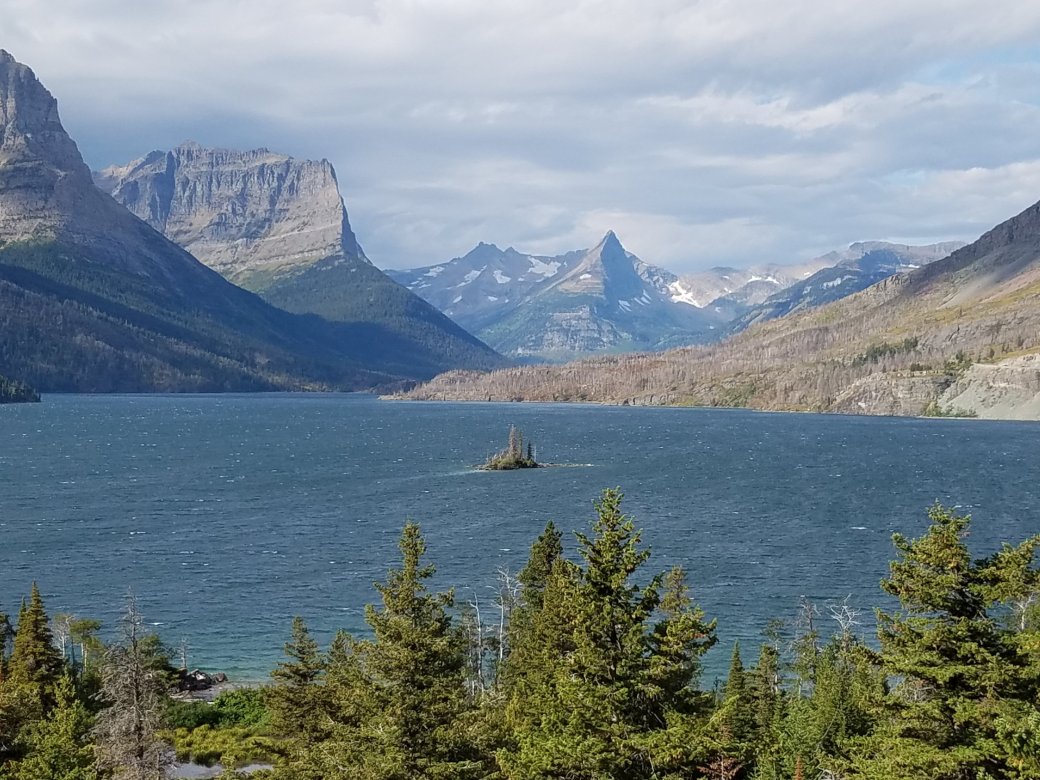 Nature, our world, wants to show us that life is best lived simply and in harmony. As I was thinking about these things sitting at the East Glacier Rail Station, I noticed etched into the outside of the station’s wall the words ‘Tiny Little Dog’.

I’m wondering if this was a Native American traveler or a well trained Shihtzu just passing through in ’76. Doesn’t really matter as I just hope they really enjoyed their stay at Glacier and the journey they were on. I know I have and am.

See you down the road….